ManyPets provide pet insurance for cats and dogs, and I started paying for dog insurance 7 years ago after reading positive reviews about Boughtbymany (what they used to be called before ManyPets).

I discovered (the hard way, after claiming on the insurance) that ManyPets are a business that are viewed wildly differently by their customers, and the reviews on sites like Trustpilot and Feefo vary significantly.

To me, they look like a business in turmoil that has separate departments that don’t interact properly with each other, and they make some very strange decisions when they are clearly not going to benefit.

One of those decisions is the sending out requests to be reviewed on Trustpilot and Feefo.

Any logical business would adopt one of the following strategies:

There’s huge conflict between the 5-star and 1-star reviews that ManyPets have on Trustpilot (as at November 2022): 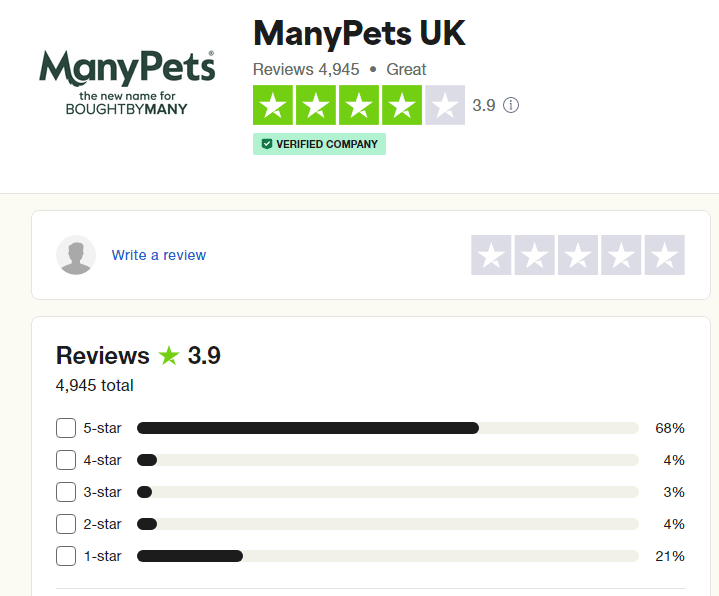 The average (3.9) looks OK but the detail level shows opposite ends of the scale with:

Although the 5-star reviews outweigh the 1-star reviews by 3 to 1, the fact that 21% of their reviews are 1 star should be concerning to anyone.

I am one of those providing a 1 star review and reading the other 1 star reviews had me nodding my head in agreement to the key comments people make:

On the flipside of those 1 star reviews, the 5 star reviews were glowing, with people saying that they had their claims handled quickly and without problems.

I am a bit suspicious here though because I saw things that raise concerns that many of those 5 star reviews may be faked:

Assuming that all of the 5 star reviews are genuine (which I now doubt that they are), it feels as if claims are handled by two completely separate teams within ManyPets – the good and efficient team, and the bad and useless team.

Unfortunately, I very much suspect that the 68% of 5 star reviews are bolstered by fake reviews.

If you sort those reviews by the most recent (https://uk.trustpilot.com/review/manypets.com%2Fuk?sort=recency) you’ll see that the vast majority are a mixture of 5 star and 1 star reviews, so this is not a case of ManyPets being poor historically and fixing problems recently – the mixture of good and bad reviews are consistent.

If ManyPets had Trustpilot reviews that were mostly 3-5 star with a relatively small percentage of 1-2 star reviews, then things wouldn’t be so noticeable, but their structure of reviews indicates that something is very wrong with their business.

Here’s something else that sounds alarm bells – they’ve only replied to 27% of negative reviews:

Sometimes companies don’t engage with negative reviews because they know that they have no good answers to provide, and they risk further responses from the angry customers that make the reviews look even worse.  I suspect that’s the case here, where 73% of their negative reviews aren’t responded to.

There is one thing that’s positive about their transparency though – they ask everyone for a review, regardless of how the relationship has gone.  That at least is admirable.

However, it’s also fundamentally stupid when ManyPets know that they are going to get 1 star reviews from people that they already know they have annoyed.

This is where things appear to be very broken within their business.  Most larger businesses would have processes in place that track metrics such as reviews on sites such as Trustpilot.   Those processes should trigger responses in line with this:

The fact that ManyPets have so many 1 star reviews on Trustpilot shouts out that the business has some major problems.

If it was my business then I would have sacked many people by now.

It’ll be interesting to see if my 1 star review of ManyPets on Feefo stays on the site.  This was submitted on 19th November 2022: 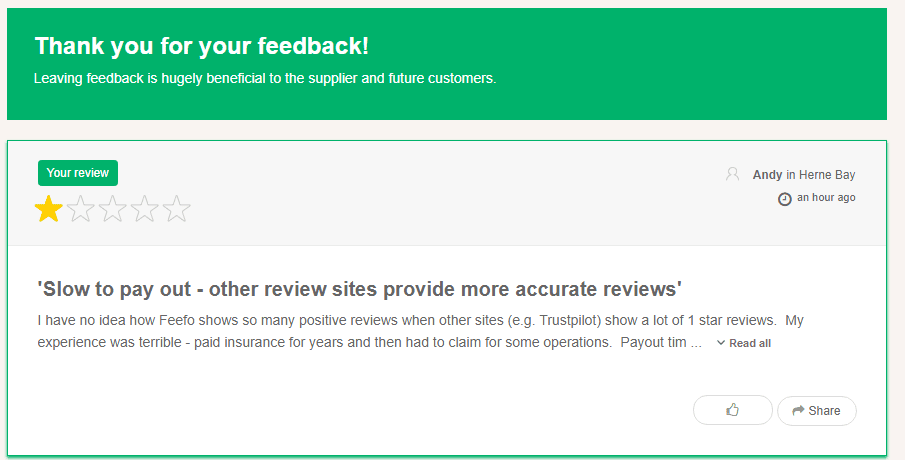 I was suspicious because they have a 4.5/5 rating on Feefo but are apparently not displaying the vast majority of the reviews, as you can see circled in red here: 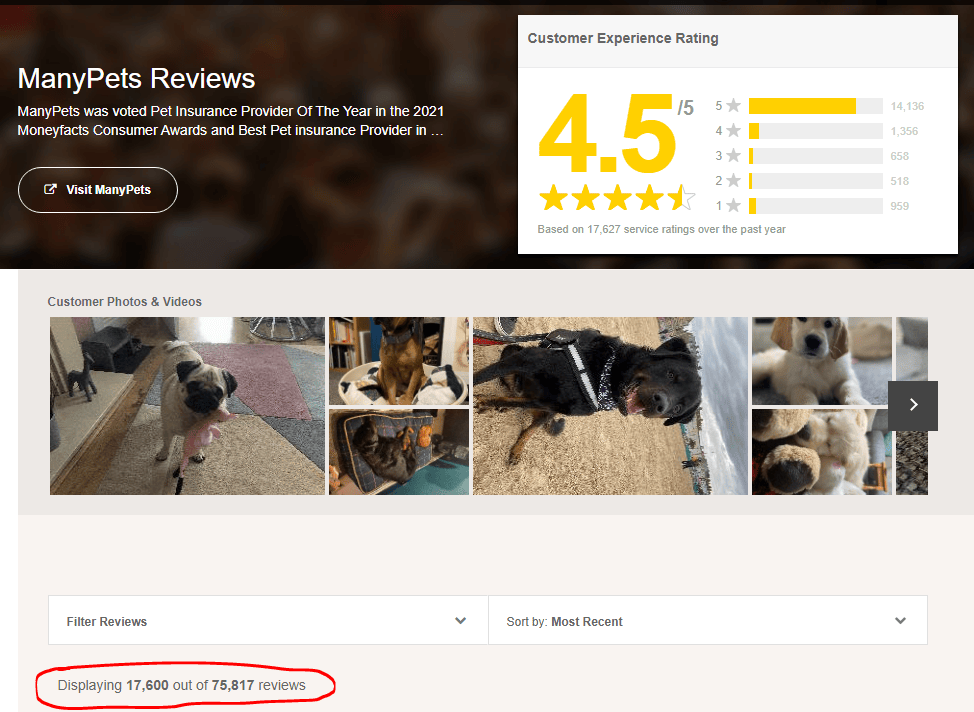 I realised that the default filters show only the past year of reviews and although all reviews can be viewed, the 4.5/5 overall rating applies only to the past year.

However, there’s something odd here because the Feefo reviews show:

So I looked more at the 5-star reviews and realised that many of them related to the honeymoon period of starting insurance with ManyPets.

For example, this person:

I only looked through a few pages of the 5 star reviews but it became very clear that they were bolstered by people happy with the signup experience and much less so for people needing to make a claim.

This makes the Feefo ratings effectively worthless and the only resolution would be to filter ratings into categories:

The figures for each of those would likely paint a very different picture.

As with all review sites, it shows that you have to dig deeper than buy on the basis of what the overall rating shows.

My experience leading to my 1 star rating of ManyPets

We set up insurance for our dog, Rosie,  7 years ago, initially via Boughtbymany in the days before they became ManyPets.

The signup experience was very slick and I couldn’t fault it.

The added sweetener was that they paid back 20% of the premiums for each year that no claims were made.

That was all fine until I made the first claim in May 2022.

ManyPets had said that they would deal with everything with the vets, but that turned out to be not the case.

Our dog (Rosie) was number 1 in our house (as far as my wife was concerned).  Above me, children, and even chocolate – Rosie was everything to her.  I’m sure that will resonate with many reading this!

So when the vets picked up on some lumps during a routine check, it was top priority to get a resolution.

She needed mammary lumps removed (in a series of two operations) and I asked the vet to arrange the finances with ManyPets.  They politely declined, stating that ManyPets take far too long to pay out, so I’d have to pay the cost and claim it back from them (£1,018).

So I did that and then started the pain of submitting that claim.  On their website they have a range of conditions that can be entered and mammary (anything) wasn’t amongst them so I emailed them, with the vet receipt, noting the continuation operation in a few weeks (when she’d recovered from the first).  That led to a series of forms to allow them to deal with the vets (who again had to prove the cost of the operation).

On 7th July Rosie had the second operation which I paid for (£647) and contacted ManyPets with the receipt and asking where we were on payment for the first operation.   I heard nothing back so chased them by email (26th July).

2nd August I rang ManyPets as I’d had no response/updates on the claims.  The person I spoke to did send a confirmation email that they would be looking into it.  From then on there were a few texts saying they were looking into the claims.

Rosie collapsed on 16th August and we took her to the vets who treated her and investigated further, identifying further lumps that were inoperable.   She was put to sleep on 17th August, leaving my wife distraught and me with another £1,481 bill to claim back from ManyPets.

On 20th August I notified ManyPets about the death and the additional claim.  There was zero response from them and I was disgusted that they didn’t have any process in place for when a pet had died.   I’d assumed that a business dealing with animals that their owners very much care about would be a business that is compassionate in the event of deaths.

I waited another week until 27th August when I send them a very stiff email of complaint about:

7th September they acknowledged the complaint and said they would respond within 4 weeks of the original complaint.

15th September they emailed to confirm they were paying out for the original claims up until 11th July (this is over 2 months later), and that was paid within a few days.

October 26th – I contacted them again about the claim made 20th August, that had not been paid in over 2 months.  If I hadn’t contacted them, I suspect it would have dragged on forever, like the original claim.  On 7th November they emailed to say they’d approved the claim and it was paid within a few days.

How crazy is that, from a few perspectives:

Yes, the bigger companies are, the more likely there will be communication breakdowns, but should they be necessary?

Surely ManyPets would have a system that, when someone complains, it puts a big red flag across all their systems, telling them to tread very carefully in their communications?

Also, their process when a pet has died is extremely flawed.  When making a claim for that element (cremation), ManyPets have a category on their website for ‘farewell claim’.   You’d think that would automatically trigger a sequence of events as follows:

As it turned out, that didn’t happen.  All that did happen was, a few weeks later, we received a tiny scrappy card expressing sympathy.  It was so poor that I had to bin it as it would have upset the wife.  How much does it cost (vs the insurance premiums over the years) to put a bit more effort in?

This page is here for the benefit of anyone considering ManyPets for pet insurance.

It’s here to help people read beyond what they initially see (via reviews) and to make an informed decision about who to choose for their pet insurance.

The recommended checklist (if considering any insurance firm for pet insurance) is this:

Please feel free to add any thoughts you have in the comments below.