In theory, Google Ads (Adwords) is there to serve the advertisers who put budget into making their products & services visible online.

But it’s limited in many ways that are detrimental to the advertisers and beneficial to Google.

IP addresses that you may want to exclude

There are many types of website visitors that you don’t want to be either seeing or clicking on your Google Ads.

Excluding your own company from seeing your Google Ads

How to stop Google Ads clicks from competitors and suppliers

What Google gives you to block IP addresses

Google gives you a tool that lets you paste in IP addresses (including some IP address ranges) that you don’t want to be seeing your adverts.

Is 500 rows of IP exclusions enough?

No – it doesn’t even scratch the surface of what’s needed.

It’s better than nothing, and can save you lots of wasted Google Ads clicks and should certainly be utilised … but it’s tiny in comparison to what you need.

See in particular our page How to use IP exclusions to stop Google Ads clicks from within the Education sector to see why.

Quite simply: because they would lose huge amounts of revenue if you were allowed to easily exclude a lot more of the IP addresses that you don’t want seeing your adverts.

Google will let you exclude an IP address or, to a certain extent, an IP range.

In the image below you can see that University of Warwick has four individual IP ranges (which would take 4 rows of your 500 allowance), but it also has a much bigger range of 137.205.*, which would potentially allow you to block a huge range of IP addresses from within that university from seeing your adverts …

To add Warwick University to your IP exclusions, part of what you could do is this:

Instead it makes you split those out to individual rows, eating into a huge amount more of your 500 rows limitation.

If Google were an ethical business, they would respect the budgets of their Google Ads advertisers.

They would let advertisers do the following:

So, if a business didn’t want students seeing and clicking on their adverts, they could automatically exclude visibility to anyone within the education sector by ticking/unticking ‘Education’.

Alternatively, Google could allow advertisers to have a larger number of IP exclusions rows or allow the use of more wildcards on bigger IP ranges.

Why it doesn’t happen

It’s not a technical limitation.

Google knows precisely who each visitor is to their search engine.

If WE (A1WebStats) know such information, then Google, with their huge resources, definitely do.  For example, here’s an identifiable visitor from the education sector, as shown within A1WebStats:

The same applies to other industries.

So, if someone didn’t want their adverts made visible to companies within the automotive industry then they’d avoid getting clicks such as this: 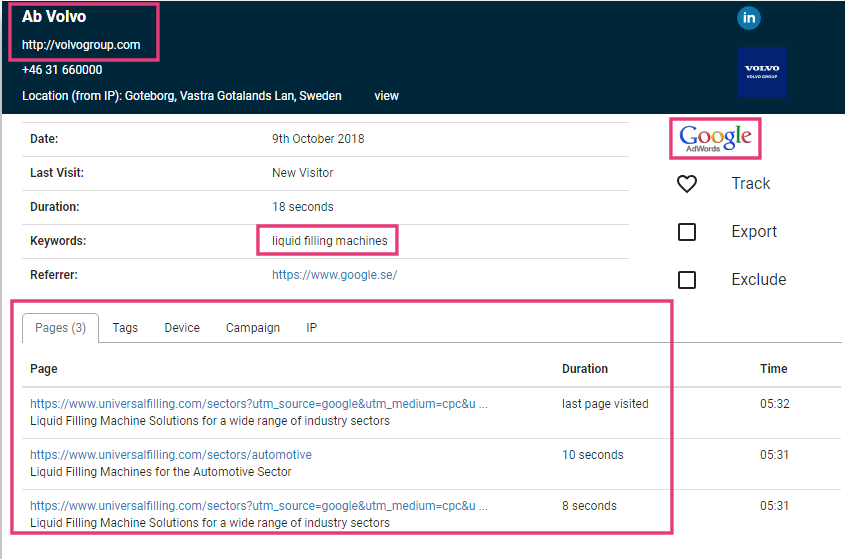 So why doesn’t Google make it possible for people to exclude certain types of searchers from seeing the Google Ads of their advertisers?

It’s all about revenues.

Google wouldn’t utilise that information for the benefit of advertisers, because it would lose them $Billions in revenue if advertisers had the choice of only being visible in front of industries of interest to them.

Instead, they offer the paltry limit of 500 rows worth of IP address exclusions, and even then, make it hard to exclude large ranges (particularly those within the education sector).

Need more convincing that Google are an unethical business?  Read on …

Within Google Ads settings you can choose to stop your adverts showing within certain postcode areas.

That sounds OK until you realise it’s just the broad postcode level.   So, if an advertiser wanted to stop people from the University of Kent from seeing their Google Ads, they couldn’t select just that postcode CT2 7NZ.

Instead they are limited to the broader exclusion covering the whole of CT2, which would mean numerous potential buyers wouldn’t see the adverts in that CT2 postcode area.

Once again, Google have no excuses – their tech could easily allow stopping Google Ads visibility to people in specific postcodes, but it chooses not to because that would give advertisers too much power that would damage the revenues of Google.

Capitalising on what Google DO allow you

Extremely limited though it is, 500 rows of IP exclusions is better than nothing IF it’s utilised to maximise the small allowance.

These pages help you to focus on how to make use of IP exclusions, depending on which types of Google Ads views and clicks that you want to avoid the most:

Excluding your own company from seeing your Google Ads

How to stop Google Ads clicks from competitors and suppliers