Hey, this page is a few years old now and we’ve created a brilliant new page about Lead Forensics reviews, that separates into different types of reviews (postitive, negative, staff-related, sales pitch related), and includes an all-important section about how Lead Forensics can actually LOSE you business.   Feel free to read the rest below but for the super new insights, go to our page Lead Forensics Reviews – the Pros and Cons.

Before we do, you may be interested in this page if you’re considering Lead Forensics:

You may also be interested in the key differences between us and Lead Forensics.

We’ve been analysing what appears in Google for ‘Lead Forensics reviews’ for many years now.  Something that hasn’t changed from last year is that the paid ads continue to be a combination of Lead Forensics ‘friends’ and competitors to Lead Forensics.

Those paid ads change all the time but at the time of writing, this is how the top few looked: 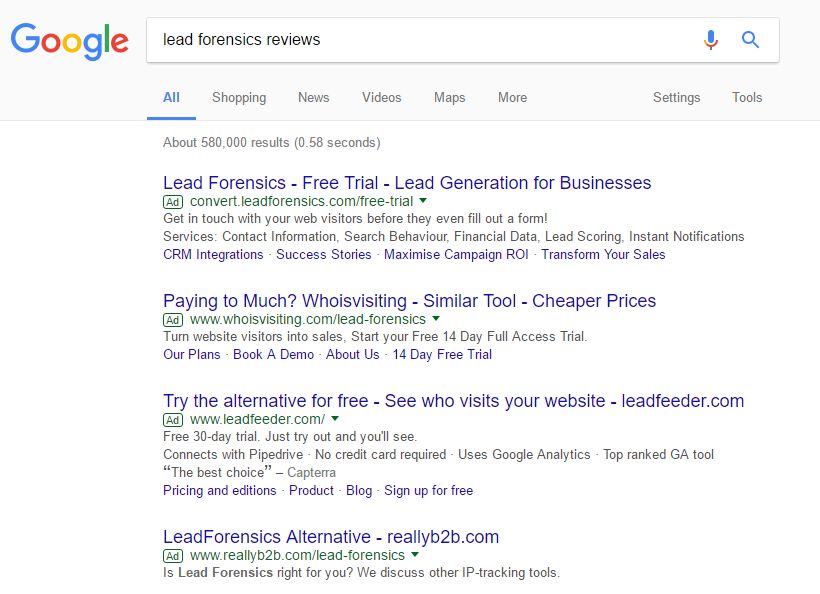 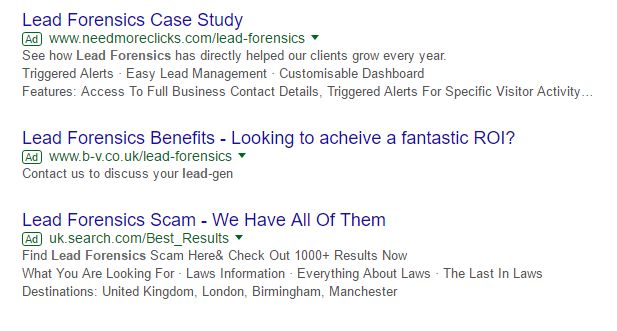 Let’s start by saying that you can’t rely on any paid advertising to present an unbiased review (of most things) so if your interest is in impartial reviews of Lead Forensics then you can probably skip right over those paid ads.

However, if it’s of interest, here’s our summary of those that appeared when we searched …

Of the seven ads:

So the paid adverts can’t be really considered impartial ‘reviews’, which brings us onto …

Here’s the picture of the top 9 (we couldn’t fit 10 into the screen, but the tenth is their own Facebook page) at the time of writing: 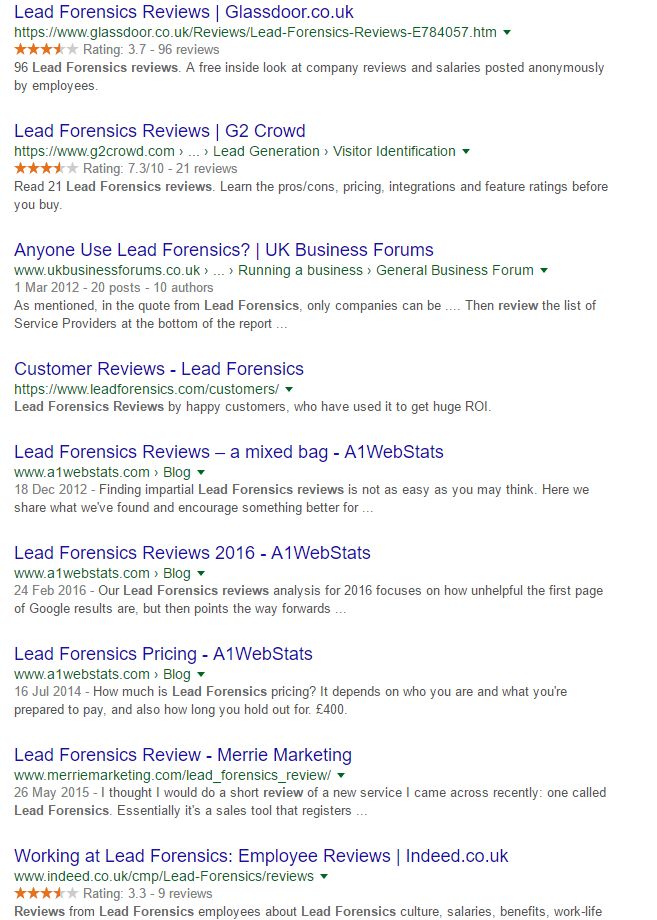 The top result is Glassdoor, which has reviews about the company itself, from people who work there.  So not reviews about the product itself (and to be honest, based on conversations we’ve had with ex-Lead Forensics workers, not a full reflection).

The second result is from G2 Crowd, which can definitely be seen as genuinely impartial in their reviews.  What’s fascinating about the people who reviewed on there is that some are scathing of Lead Forensics and others are enthusiastic.  Why is that fascinating?  Because reading the comments from some of the enthusiastic people demonstrate how much they are limiting the success of their businesses by making comments such as ‘effectively replaces Google Analytics for our business’, which demonstrates a lack of understanding of what analytics is all about.  Overall though, the G2 Crowd reviews appear to be untainted by engineered reviews.

One is a page from the Lead Forensics website (so it’s not going to help as an impartial review).

A search result that is consistently high in the organic Google listings is http://www.ukbusinessforums.co.uk/threads/anyone-use-lead-forensics.247390/.  That forum discussion has been around from 2012 onwards and, like G2 Crowd, has a range of reviews, although tends to be more critical about Lead Forensics.  Again, there don’t appear to be any engineered reviews.

Three results are ourselves (A1WebStats).  One is an old review still within the Google results.  Another is our review update from 2016, and another is a page about pricing, which Google has decided to list as relevant to reviews.  None of those could be considered to be impartial because we’re in the same business space.

Finally, similar to Glassdoor, there are reviews from employees about Lead Forensics, but they don’t really help with getting an understanding of the product itself.

It’s interesting what difference can be seen within a year of doing these reviews.

Last year (2016) the organic search results contained a lot more of reviews apparently engineered by friends of Lead Forensics, plus more in the way of their competitors appearing (at the time of writing, we see only ourselves appearing).

Now the picture is more useful for Google searchers, as there are a definite three separate results on page 1 that lead to what could be considered impartial reviews.

Before A1WebStats started, we used Google extensively to see which companies appeared when we made various searches (for example, ‘companies visiting my website’).  There was nothing of significance there, and certainly not Lead Forensics.

Over time we became aware of Lead Forensics because they actively contacted our customers and trial subscribers, effectively trying to ‘muscle in’.

So we responded accordingly, making ourselves visible when people were looking for alternatives to them.  Think: big company (them) vs small company (us).

Since then we’ve become hugely proud at the level of attention they give us (and also by the increase in new entrants to this market since we started).  In a strange kind of way we love Lead Forensics because they help us to sell more, which is really kind of them.  They visit our website most days, they have lots to say about us to people they speak to (negative of course) and through it all we’ve always been very honest by saying words to the effect of:

Try Lead Forensics and try us and others all at the same time. Don’t be forced into a sale but do be open to discussing what your website data actually means because our history is in website success, not purely trying to follow up on companies that have visited your website (which is such a limited approach).  Having invested time in looking at a range of solutions then you will make your own mind up about what’s right for you.

Yes, we have frequent and daily conversations with people who have trialled Lead Forensics and have trialled us.  We know about the sales tactics, spin etc. It’s just part of the daily routine. It doesn’t really matter what Lead Forensics try to do to us or others in our industry – it’s ‘business’ at the end of the day.

What does matter to us though are ethics. We are 100% against any business paying for our type of software if they’re not going to gain from it. Whether that’s at Lead Forensics high pricing or at our lower pricing, there still has to be a return on that investment, and (in our view), that should be possible within a decent length trial period (30 days with full access to the data in our case but about a week typically with no login access to the data for Lead Forensics).

Something that we’re seeing a lot more of now are companies that approach us, having been users of Lead Forensics but have decided that:

We’re actually very proud of our policy that stops people feeling as if they’ve made a mistake. That policy effectively says:

We’ve been advised so many times (by well-meaning business consultants) to “be more like Lead Forensics – go out there and push for the sales at higher prices”.  But that’s not us – we’re all about helping businesses to succeed (via their website strength) in exchange for a fair fee, creating many subscribers who feel more like friends than customers. There is no-one in the world who can say that we’ve tried to ‘sell’ to them, nor will that ever be the case.