Beware responding to an email from Google asking you to opt in to automatically apply recommendations on your Google Ads.

The email actively encourages you to allow Google to go off and make changes to your account. 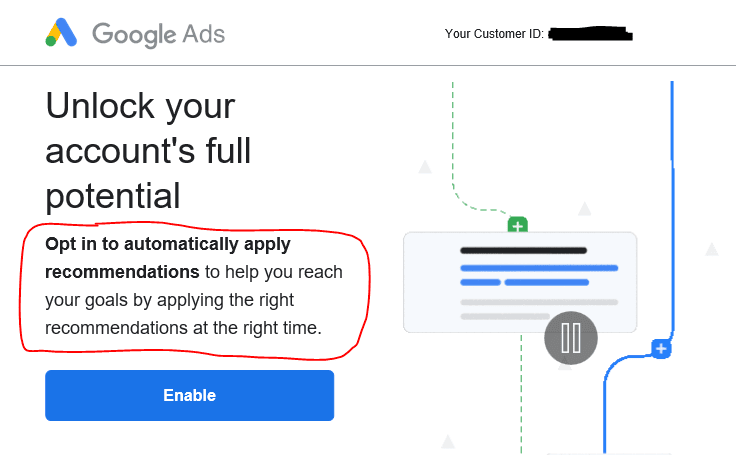 Google is not your friend.

Google is also not as intelligent as it makes itself out to be.

Within that same email you will see this part that shows you what Google will implement ‘to help improve your account performance’: 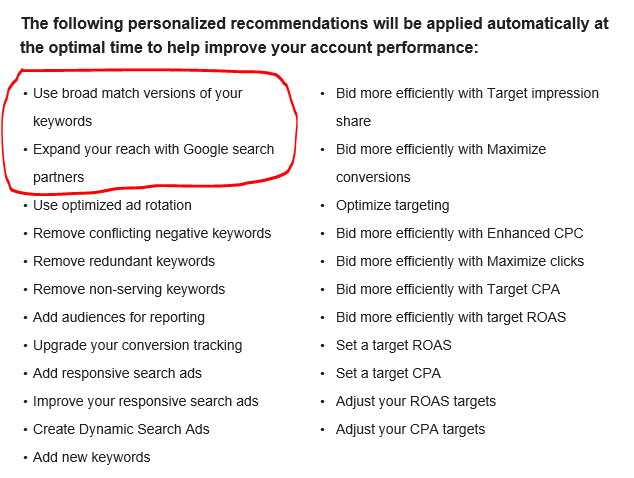 Use broad match versions of your keywords

Broad match keywords, if unmanaged, are like writing a blank cheque to Google.

Broad match effectively says to Google: “hey, I want to be visible for this keyword phrase … but if you think a search is relevant to that phrase then make my advert visible”.

Google then often makes your advert visible when there’s not a good match between the search phrase and the keyword phrase you have.

So you get more clicks, which are mostly poor quality, and who bounce from your landing page.

All you have to do is set up an ad group with one or two keywords that are broad match.  And then wait.

Over time you will get clicks (probably very quickly) and on first glance you think you’re getting clicks for the keywords you created.

When you dig deeper into the Search terms part of Google Ads you then see loads of non-relevant searches that people used and that triggered your advert (because it was set up as broad match).

We’ve seen some real horror stories of Google Ads accounts that have broad match keywords and were getting clicks from search phrases that were totally irrelevant.

It’s no surprise that Google have broad match set up as the default option when people create accounts – it’s so that they can make billions out of such poor targeting because the advertiser is usually unaware of what’s happening.

In short, it’s totally irresponsible for Google to say they will automatically apply broad match via their account optimisations.  The only winner will be the extra revenues that Google make, while your business wastes budget unnecessarily.

This is how Google define search partners:

Sites in the Search Network that partner with Google to show ads and free product listings. Search partners extend the reach of Google Search ads and listings to hundreds of non-Google websites, as well as YouTube and other Google sites.

On search partners sites, your ads and listings can appear on search results pages, site directory pages or other pages related to a person’s search.

What that means in English:

Instead of your adverts being visible only on Google itself, they will be made visible on many other websites where people can search.

On the surface that sounds OK because in theory, if those are trusted search partners then there should be some sort of quality control.

In reality it’s often quite different and the clicks from search partners are often low quality.

You’re highly likely to discover that you got weaker results with the search partners switched on.

The Google Ads system is ultimately tech that can either be managed by humans, who know what they’re doing, or allowed to do its own thing.

Tech can be wonderfully clever and we’re certainly not saying that Google tech isn’t clever.

What we ARE saying is that it’s not as clever as they think it is.

In fact, it’s way off what it needs to be.

Google knows everything about those people who are using their search engine.

But they choose not to use that knowledge for the benefit of advertisers.

For example, they know the locations, business types and more about those people who search Google, but they don’t allow advertisers to include or exclude visibility to certain types of searchers.

Because if you could be that precise, and even though you’d probably pay more per click, Google would lose massive amounts of the revenue it gets from allowing so many irrelevant clicks to happen.

Google knows so much about those who search it.  They actively choose not to use that information for the benefit of advertisers.

You can read more reasons to distrust Google in our page https://a1webstats.com/knowledge-centre/b2b-marketing/5-ways-google-adwords-harms-businesses-wastes-peoples-time/

To the average person, a seemingly friendly email from Google is something that they could just click on the button and let Google apply their recommendations.

If you do that, then make sure that you are analysing what your enquiry/sales levels are like in a defined period after doing that.

The problem then though is that Google will have applied loads of stuff to your Google Ads account and you then have to unravel what they’ve done, and would highly likely need a Google Ads consultant to get you back to a better position.

It’s extremely unlikely that you will get good results from allowing the Google machine to apply those recommendations to your account.

While there may be some positive aspects of that optimisation, there will equally be negative ones.

You will of course see that Google are ongoing offering optimisations that you can agree to within your Google Ads account, and some of those you should apply if they make sense.

However, you even have to watch out here.  Take this for example, which is recommending to raise a budget: 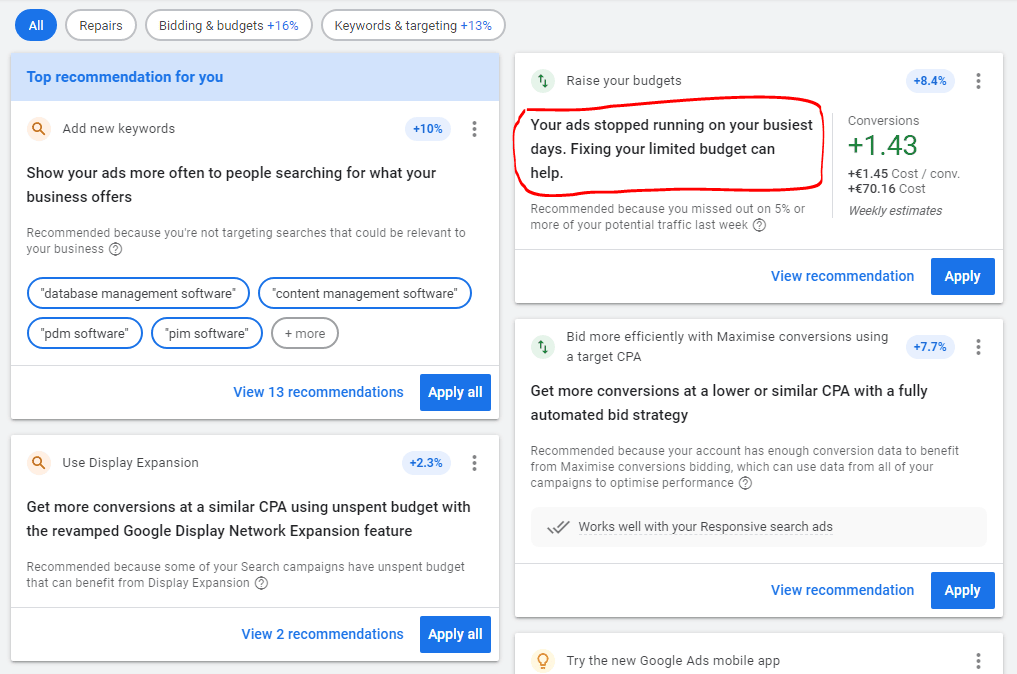 What if the existing clicks aren’t achieving enquiries (because the website has weaknesses)?

At no point does Google Ads say: hey, all those clicks you’re getting aren’t getting good results for  you.  They just keep taking the money from those who don’t have a solid marketing spend vs return on investment checking process in place.

In closing, please tread carefully – Google is NOT your friend.  They are a business with shareholders and a constant thirst to drive higher revenues from those who aren’t savvy enough to distrust them.

How to maximise results from outbound sales calls

How an old website date can lose you business