Google is one of the most hypocritical large businesses around.

Google SAYS that they want people to have a good search experience but that conflicts with what often happens – particularly when Google Ads is in the mix.

Although these are just a few reasons why Google Ads negatively impacts advertisers and those who click on adverts, they’re probably the most significant …

When you first create a Google Ads campaign, the Google system will allow you to set your keywords up as broad match.

That’s their way of making $billions of revenues from advertisers who don’t realise how to set it up properly.

When you have keywords set up as broad match Google will display your adverts when people type things that Google think are related.

The problem is that Google get it wrong.

Here’s an example of a keyword of ‘food labelling regulations uk’ set up as broad match:

And here’s the actual search term someone used, which made the advert appear, linked to that keyword of ‘food labelling regulations uk’:

While it’s feasible that ‘beer labelling requirements uk’ is related to food labelling, it’s actually a mile away from what the advert and website landing page was promoting.

Using something like phrase match within Google Ads will result in less visibility and clicks from Google Ads, but the quality of those clicks will be so much better.

Here’s an example of phrase match, which ensures that only people who use that phrase (label management software) or slight variation will see the advert in the Google results:

Action you can take on your Google Ads account

Log into your account and bring up Keywords and then filter to see if there are any that are broad match, as in this example below: 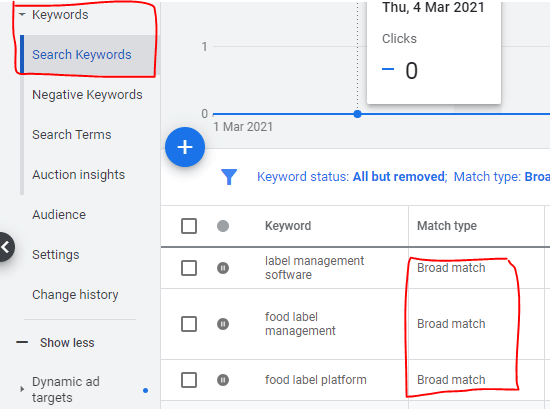 Then use the Search Terms function, which will show you the actual search phrases that people used before they clicked on your advert: 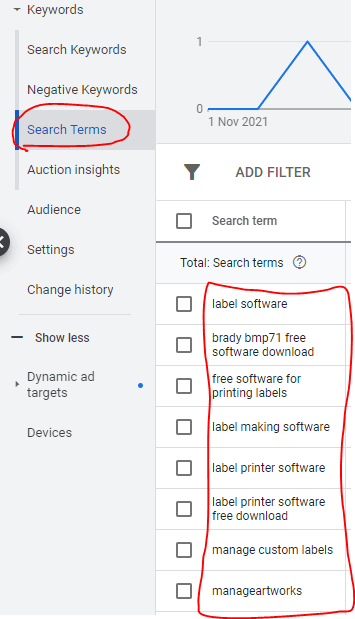 If you have broad match keywords then you’re likely to see many search terms that are completely off target, and that have wasted your Google Ads budget for those clicks.

We have seen hundreds of Google Ads campaigns set up as the default of broad match keywords, and the businesses being blissfully unaware that they are pumping budget into Google, out of which most of it is wasted.

Google is totally aware that, even though broad match can work when combined with other strategies (e.g. negative keywords), the vast majority of people don’t have the knowledge/time to implement campaigns in that way.

So, Google make tons more money and the businesses get a ton of irrelevant clicks because people type something into Google, see a result pop up, don’t even realise it’s paid advertising (see our next point about hiding adverts), and so click on the advert without hesitation.  Then they realise that it wasn’t what they were looking for and they click back to the search results.

Google earn from the click, the business gets nothing out of it, and the searcher feels their time was wasted by clicking on that link.

The culprit – Google Ads broad match being the default setup option (and people not realising there are other ways of setup).

If Google were an ethical business they would do one of two things:

Hiding the fact that adverts are adverts

This image is taken from http://searchengineland.com/search-ad-labeling-history-google-bing-254332.

It shows the changes (until 2017) in how Google ads have evolved to a point where the untrained eye won’t realise that what comes up in search results are an advert: 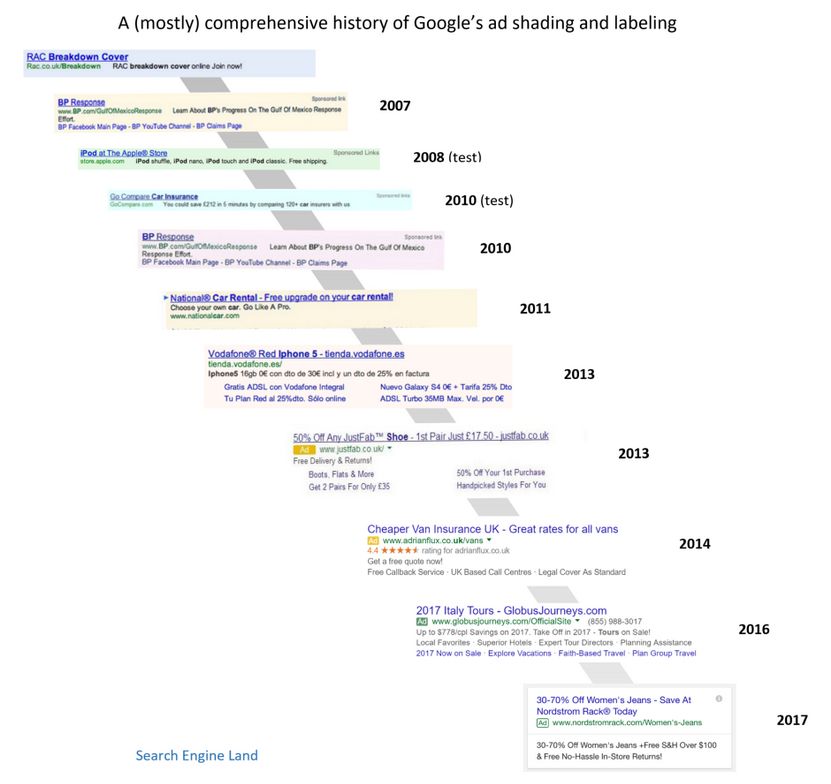 In 2022 we are now at the point where the adverts have more in them, have removed the green around the ‘Ad’ (to make them look even more like organic search results), and the majority of the first page of Google search results will be dedicated to adverts.

If you are paying for Google Ads then you will get more visibility.  That’s great IF you have ticked all these boxes:

Searchers will generally click on what jumps out at them, which will usually be an advert.   Sometimes they don’t even bother reading the advert text properly and just click.

Unless your core skillset is Google Ads and conversion rate optimisation, then it’s quite likely that you will be wasting budget thanks to Google making it appear that all the search results are the same.

Below you can see how there is negligible difference between the paid adverts and the organic results beneath.  Just that small ‘Ad’. 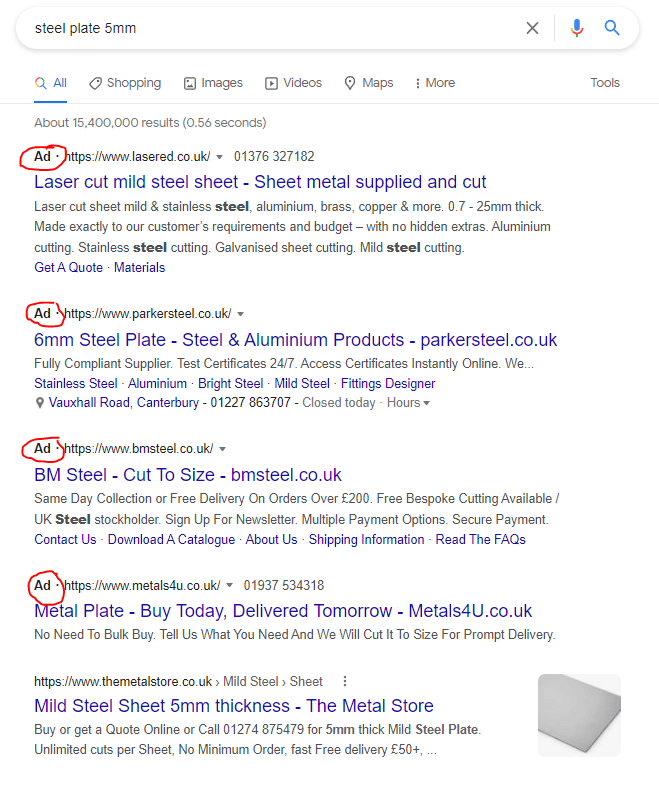 Google could have kept their adverts distinctly different to the organic results, but they make a lot more money from being deceptive.

Although Google allow minimal exclusions to be applied to the visibility of adverts (e.g. ensuring that adverts aren’t visible in certain countries), they’re not offering what they could to benefit the advertiser who wants to achiever the best results from their budget.

As an example, if you want to advertise on LinkedIn, you can choose business sectors that you want to be visible in front of.  You can’t do that in Google Ads.

One of the common annoyances of many Google advertisers is that they get wasted clicks from people in the education sector, who are just researching something, but will never be buyers.

Google knows more than anyone about the people who could click on the adverts and so are in a position to include such customer-focused functionality.

They, for example, would know that someone is physically at a university (or using the university infrastructure remotely).  Equally, they’d know if someone was from a manufacturing business.

Here at A1WebStats, we regularly have conversations with our subscribers, who are fed up with getting Google Ads clicks from people in the education sector.  Here’s an example of a wasted click: 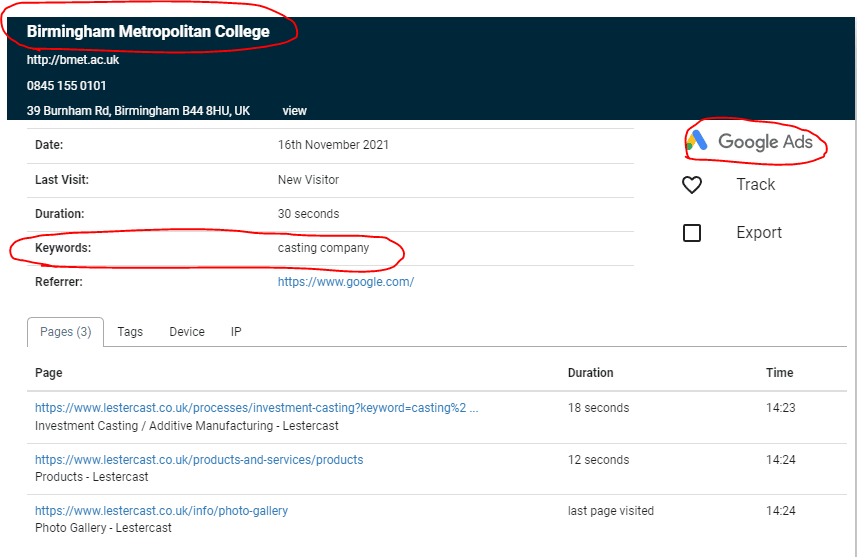 Every Adwords click from an unwanted business sector is a click taken away from others who you want to be clicking on your adverts.

If a tiny business like A1WebStats can track the organisation names of visitors (where they can be identified), then Google certainly could offer advertisers the chance to show their adverts to only those sectors that are of value to them, OR to specify organisation types that they don’t want to be visible to.

Why doesn’t Google do that?

You can limit Google Ads visibility but it’s extremely limited, as you can see in our more detailed guide to Google Ads IP exclusions.

Many years ago, Google had what we considered to be a fairer system.

That system allowed you to use any keyword phrase you wanted.

If your advert didn’t get a strong enough percentage of clicks within 1,000 impressions, then you were penalised.

For example, back then, you could have had a search phrase of:

… and the advert would have run for 1,000 impressions and then the keyword would be judged based on what happened in the way of clicks.

Nowadays, if you use a keyword phrase that’s too niche (according to Google) then you’ll get a ‘Low Search Volume’ message against it (and your advert won’t run).

And this is where it’s insane.

Using the example above, if you genuinely sold floral trousers for tall ladies in the UK, had a page (or section) on your website dedicated to that, and Google could see the interaction levels (which they can), then that is a perfect match for the ladies who want that product.

Instead, that search phrase brings up these ads: 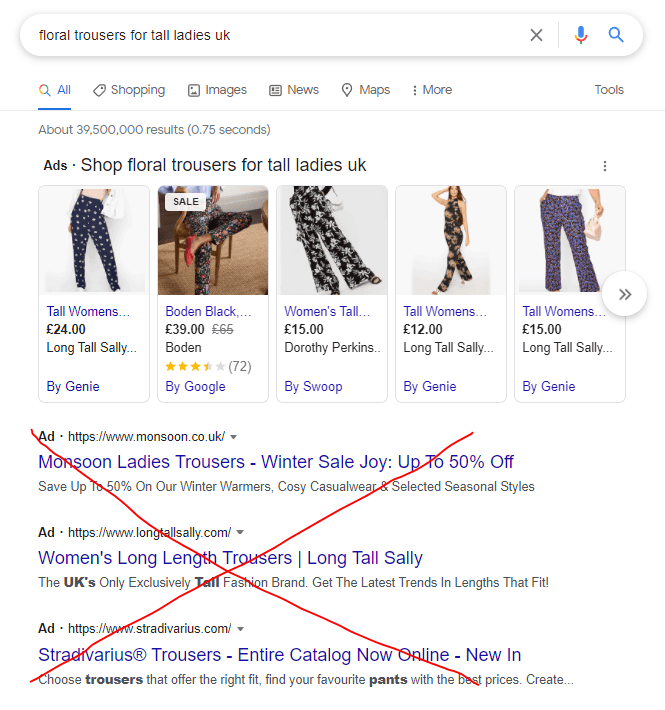 The image ads may possibly be useful to look through but only one of the other adverts refers to ‘tall’ and none of them refer to ‘floral’.

That’s not the fault of the advertisers – Google just won’t allow such niche phrases.

When Google killed off that flexibility of keywords setup they made life harder for advertisers to promote their products and harder for those who may be searching for something very specific.

Instead, if you’re looking for something quite specific in Google now, then you often have to click through to various search results (including Google Ads results) to find what you were looking for.

Google benefits through more clicks because people are hunting around for something specific and when they can’t find it they will keep clicking on links (including paid adverts) until they find it.

That creates multiple clicks that make Google money but result in a quick return to the search results.

At the time (many years ago), Google came up with all sorts of reasons why they killed off that functionality (‘load on servers’ was one of the excuses, which was laughable), and although this way of advertising/search may need some modifications because search has changed so much over the years, how many businesses would prefer to have the option to have visibility for very specific search phrases?

We suggest: a lot!

Yes, you can use Google Analytics to create funnels that will show you certain types of paths, and you can set up conversions tracking.

But it’s all woefully weak.

Here’s what you see within A1WebStats when looking at a visit from a Google Ads click: 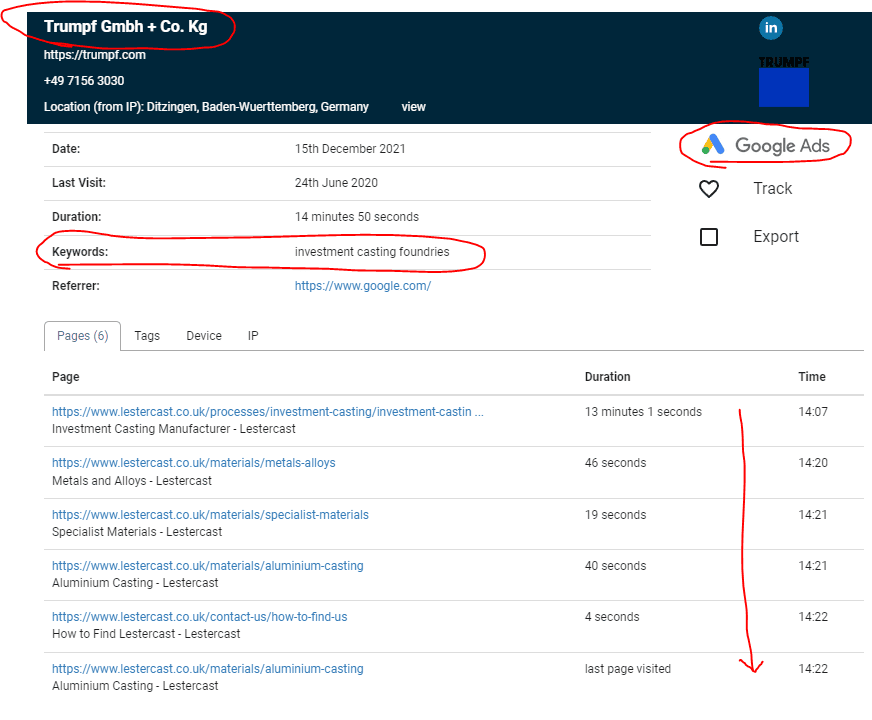 In this case it was an identifiable company that clicked on the Google Ads advert, after searching for ‘investment casting foundries’, and then looking at several pages on the website.

Often it’s not possible to identify the company (e.g. someone clicks from a mobile device, or from at home, or they’re not set up so they can be identifiable as a company) but the point is that it’s possible to see the page by page movements of every visitor who came in via Google Ads.

If a small business like us can offer it as part of the system functionality, then Google could do the same.

Why don’t they do it (even keeping the visitor organisations unidentifiable if they wanted to)?

We believe it’s because they don’t want Google Ads customers being able to see too much detail about what happened with their clicks.  If advertisers have more visibility then they will better-understand how poorly websites may be performing, make things better, and so gain more from the paid clicks they get.

And there’s the problem – if businesses gain more from their paid clicks then they may not need to spend as much budget to get the levels of business enquiries/sales they desire.  That would negatively affect Google’s revenues.

That’s a limited view though because if businesses (as we advise our subscribers to do) took a micro-level view of all their Google Ads clicks, they would then identify opportunities to improve (within the websites themselves AND the Google Ads campaign setups), which enables them to gain more business.   When they gain more business and feel their Google Ads/website is really working for them, then they will put extra budget into their advertising.

That would be a fair relationship between the advertiser and Google.

The business gains more from analysing paths from the Google Ads clicks (and making beneficial changes).

Google gets paid for being the platform that brought the clicks in.

Is it reasonable to expect to be able to do granular analysis on what happens to visitors after they click through from Google Ads adverts (or anything else, such email marketing etc.)?

Yes, we believe it is reasonable.  But you’ll never see Google allow you to get that level of detail.

We hope this article has provided some value to you and if nothing else, viewed Google in a different way to how you did before.

We’d like to expand this page into more reasons that Google Ads harms businesses and wastes people’s time.  Your feedback will help us to add to the reasons listed above.

What is a GOOD number of website visitors per month?