Hubspot is not designed to be a companies tracking system.

A1WebStats is not designed to be a CRM

They are very different, each with their own strengths.

Hubspot Prospects will not record many of the new identifiable companies that go to your website, and this is easy to prove both within the content of this page, and also if you experiment via a free trial of A1WebStats on your own website.

Where Hubspot is better

From a ‘companies tracking’ perspective, Hubspot is quite strong in tracking when known contacts are visiting your website.

For example, if you have a marketing list and someone clicks through to your website then Hubspot will do a great job of tracking that, wherever the person was located at the time.

This is a major plus that gives you insights into all those who you already have within your Hubspot CRM (plus those who may complete a website form that gets fed through to Hubspot).

No-one could argue against having that granular view of known contacts.

A1WebStats records every individual visitor to a website, including what those visitors looked at page by page, plus what brought them to the website.

Many of those visitors will be from identifiable companies (via their IP address or geolocation) that don’t exist within your Hubspot CRM.

In short, they are completely new to your website and so you wouldn’t have contact details for them within Hubspot (unless they choose to engage with you).

While Hubspot Prospects tries to identify some of those, it’s weak compared to other systems.

Here’s an example from one day of data, showing those that Hubspot Prospects missed, but that were shown within A1WebStats: 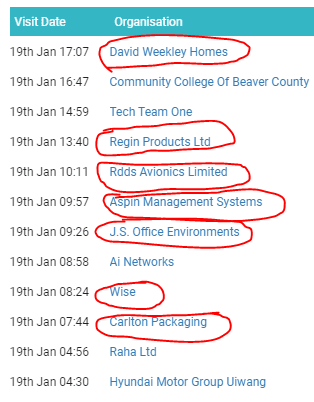 This means that if using Hubspot alone, you will never see some companies that visit your website.

What makes that worse is if they went to a competitor website that’s using A1WebStats (or similar), which would enable that competitor to capitalise on that identifiable company.

In this video we focus on an example date, comparing what Hubspot Prospects sees vs what A1WebStats companies tracking sees:

If you use Hubspot then you will have a database of contacts that you’ll know a lot about.

What you won’t see are many of those visiting companies who aren’t already within your database.  Hubspot will pick up on some of them but will miss many, as well as displaying many that are just ISPs or telcos.

A free 30 day trial of A1WebStats makes it easy to compare the difference between what we give you, and the information that Hubspot Prospects shows.

The outcome of that free trial is you reviewing those identifiable companies that were missed in Hubspot Prospects, and deciding whether that is important to you.

Do not reply in emails from big businesses

How to see who is going to your website